The role of ‘process’ in artistic research is not necessarily clear. There is a general tendency to believe that a research process starts with a set of questions to which over time answers are given. Two fixtures, a beginning and an end, here bracket a process. Accepting this crude order for the moment, it seems that a publication in JAR must be associated with the later stages of this process – ideally perhaps a report on a research project’s findings. Thus, a journal article may be seen as a research project’s output that is tied to the results obtained in the final stages of a project.

Let us consider a thought experiment and assume for the moment that the point of output was moved forward towards the beginning of a research project. This move would decouple ‘output’ from ‘result’ presenting something provisional, perhaps, or a work-in-progress. With this thought experiment in mind, I would like to discuss two aspects in an attempt to suggest a different relationship to ‘process’.

The first concerns the role of academic publications in institutional definitions of ‘project’, in which, after all, a ‘project’ promises a return on invested labour. One example may be a doctoral programme that accepts students on the basis of a project description that includes a timeline towards a final thesis. Another example may be a grant that is given to conduct a particular research project and to realise the deliverables to which a researcher has committed him- or herself. In this context, a journal publication has the function of creating evidence for the fact that the work has been carried out, which is a very different kind of evidence when compared to the evidence, for instance, of epistemic or artistic claims.

Contrast this with the everyday use of ‘project’ in the arts where ‘project’ often is meant only to indicate that one is captured by a particular issue and that a sustained relationship with this issue has been entered. Although it is clear that such projects may often slip into institutionally defined ‘projects’, it is important to note that notions of ‘project’ are not owned by institutions and that ‘project’ may be much closer to (self-)definitions of artistic practice, including artistic research practice.

Thus, my thought experiment from above that asks from JAR submissions an engagement with process may suggest a different relationship to practice. This kind of relationship to practice could perhaps be attempted in a (thought) exercise in which you present your research while avoiding results. In other words, my thought experiment suggests space for process in a journal such as JAR and, consequently, the task of deciding how much or how little process should matter in a research publication. After all, it may be the case that the particularities of its process may be important elements of the research and worthy of communication.

The second aspect that I would like to highlight in a shift to ‘process’ is the way in which process may enter discourse. Here, a discourse’s inherent historicity becomes important since process may either be related to as a thing of the past or it may remain active in the mode of its telling. Although still not reporting on results, the former approach may retrospectively tell the history of a project (‘first, I did this, then I did that…’), while the latter may create instances in which others can experience a research process. This may simply consist of an opening up of the ‘lab’ and the sharing of work-in-progress, providing that this sharing touches upon the very qualities of the research process. Furthermore, ‘process’ may not only be what a researcher has done, it may also be what is instigated on the reader’s, viewer’s, or listener’s side as he or she experiences the research.

Since we are all always somewhere in process it may appear that the direction that I have taken here should actually make things easier. However, just the opposite is the case. It is difficult to suspend ideologies that link research to results. It is also difficult to present process, which tends to disappear in its representation. And, it is difficult to make epistemic claims with something as ubiquitous and yet fragile as process.

Having reached this point, my thought experiment may appear to idealise one side of the admittedly crude dichotomy of process and result with which I opened this text. However, it seems that before we can properly even discuss the intricate relationships of process and result in artistic research, we need to confront those practices of academic publication and academia at large that are obsessed with narrow notions of output. Thus, it important to say that as far as JAR is concerned the relation between process and result is an open one, and that the way in which this relation is enacted in a submission is relevant to the way in which it can be understood, and, finally, to what it means.

This current issue of JAR presents the research of artists across a wide range of practices and disciplines. Paulo de Assis’s Con Luigi Nono: Unfolding Waves presents a detailed analysis of Nono’s ‘.....sofferte onde serene…’ in order to describe how the piece provides a field in which he, as a pianist, can work and through which performative choices can allow the piece to be better understood and creatively problematised in its complexity. In sonozones, Jan Schacher, Cathy van Eck, Kirsten Reese, and Trond Lossius expose as research practices of listening and sound production across various sites in the city of Mülheim an der Ruhr, Germany. In doing this, the authors focus on the specificity of each participant’s practice, but also on the quality of the auditory, social interactions that they have engaged with and also shaped. In Anatomical Self-Portraits as Fieldwork: Observations, Improvisations, and Elicitations in the Medical School, Kaisu Koski reflects on her role as an artistic researcher in the educational setting of a medical school. Koski describes the impact her ethnographic and artistic methodology has on the classroom, which, in turn, corresponds to a transformation of the artist’s understanding of ‘body’ as it is expressed in her artwork. Through a set of interventions, Daphne Plessner highlights the political aspects of higher education in the UK. In What is a University?, Plessner gives examples of how, through the use of provocation and irony, the everyday reality of discriminatory policies can be made conscious at the site of their application. In Stained Black Mirror, Vappu Jalonen makes tangible the way in which technology penetrates the everyday in the moments of looking at – or rather – into the blackness of a touch screen. As images engage with touch, such black mirrors become stained and challenge visual orders and the critical distance to technology they claim to be able to sustain. 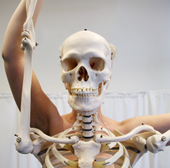 Anatomical Self-Portraits as Fieldwork: Observations, Improvisations, and Elicitations in the Medical School

Kaisu Koski
This exposition discusses an artistic research project involving a field trip to a medical school. It introduces part of my postdoctoral project as a case study, discussing photography and video self-portraits as a means for exploring anatomy and clinical skills education. Instead of analysing the resulting photo series and video piece, the exposition has a focus on process and methodology
[...] keywords:
anatomy
medical school
photography
self-portraiture
OPEN EXPOSITION

Vappu Jalonen
This work examines the material entanglements of humans and touch screens. The starting points are Donna Haraway's 'Cyborg Manifesto', read now over twenty years after it was first published, and the figure of a black mirror. The black mirror does not pretend to reflect back only that to which it has been turned. It also shows itself
[...] keywords:
black mirror
claude glass
cyborg
digital image
materiality
NSA
selfie
stain
technologized body
touch screen
OPEN EXPOSITION

What is a University?

Daphne Plessner
The popular perception of the University today involves notions of hierarchies of knowledge distribution and centres of excellence. The University is also regarded as a space where the values of social equality and mobility allegedly are reproduced, carrying the traces of sentiments such as those in which education is seen as a social good
[...] keywords:
civic responsibility
education
neo-liberalism
university
OPEN EXPOSITION