The design of expositions

In traditional research journals, the author does not define the appearance and layout of the paper. Artistic research journals that publish expositions, invite authors to format the presentation in a way that works with their research. This means a freedom of layout and positioning, but the approach can also result in some frustration.

Editing expositions on the Research Catalogue, I have heard artists sometimes say “I can’t do this, I am not a visual person, I am not a graphic designer.” But, is the laying out of the exposition so strongly a visual task, or a graphic design task after all? Is the problem even related to the layout design?

I will not go into a discussion on the definition of design and graphic design here. It is enough to remember there is a broad idea of design that encompasses nearly all goal-oriented thoughtful activity, and a narrower idea of design as a field of professional expertise. It is usually in the latter sense that exposition authors say “I am not a designer.” 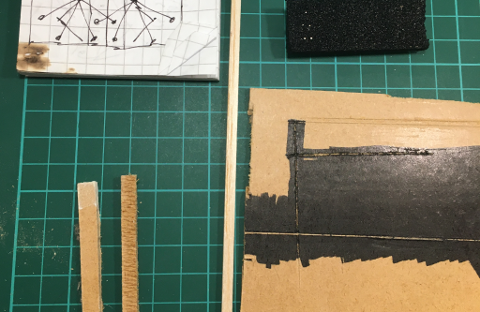 My suggestions for a way out are twofold. Firstly, the task of building an exposition might not be a design task in the narrower sense. Secondly, a researcher always makes design choices where it counts: when arranging their research materials.

Expositions obviously have an element of design in the broader sense. When discussing exposition creation, I have often used an analogy of moving paper photographs on a table surface. This is more about choosing which photographs belong together, and in what order they could be shown, rather than issues like distances and margins. This is something everyone does, not just design professionals.

Nowadays it is more likely that we open a folder of photographs and select a few to send to a friend, to share on a social media platform or for some other use. These could just as well be videos or audio files.

The above examples are already not far from building an exposition online. Whether the chosen media are photographs or sound snippets, there is always a question of organizing them. This organization should come quite naturally to the researcher, where there is a sensitivity to the material in the first place. Even if the researcher is really sound-oriented, it is impossible to think that she would not make selections and ordering for purposes of research.

This is where an artist, a researcher and a designer would be expected to do more than the above everyday examples suggest. After all, the exposition invites an expression or an articulation of research in a way that suits the research. It is possible that this expression goes against the norms of conventional (web) design. Conversely, an exposition with a neat layout could still fail in this important matter.

One misconception is that an exposition needs to use all the bells and whistles provided by the online environment. This can result in a magazine-like arrangement of text, video, images and sound snippets, when it would have been more effective to provide a selection of audio files with a corresponding text.

Although confusion and over-abundance of materials can be a strategy, in principle, where it can be justified, an exposition can be a single audio or video file. The author might bring important media to the front page and put rest of the materials in an appendix. Equally, when a large amount of material is presented in a thoughtful way, the result is often more interesting graphically than any attempts at prettifying layout.

There are of course expositions that rely more strongly on inventive layouts and more subtle graphic design choices. Some authors, who have a good motive to do this, produce outcomes that work well. However, an exposition that shows a lot of effort put into layouts can, somehow, end up lacking. In some cases authors try to build a layout design on top of a work that does not really need it, instead of considering how a layout could emerge from the research materials.

It is difficult to suggest a quick fix to an exposition that seems to have good research yet has large problems with navigation and presentation, or lacks that ‘something’ that would justify the use of an exposition rather than a more traditional article format. Expositions tend to grow into what they are and, for this reason, suggesting major rearrangements can be like asking an author to rewrite a long text from the beginning. Repositioning a few images and text blocks is comparatively easy but trimming the foliage can go only so far.

With the notion of organizing, I am not suggesting the exposition has to be thought out fully in the beginning, or that this organization needs to be rational. Many researchers have reported that building their presentation inside the Research Catalogue workspace editor has helped them to understand their materials and research better. Just as reflection occurs during writing, it also takes place during the building of an exposition. Just as an undeveloped research text may be indicative of undeveloped thinking, the expressed difficulty with the ‘design’ of the exposition might well reveal an ongoing struggle with the material.

Here I have attempted to help dissolve the idea that expositions need to be thought of as overtly graphic or visual. If there is a need to discuss expositions in terms of design, it might be more fruitful to discuss the exposition navigation and user reception as design objects. Or why not compare it to exhibition design? If the artistic research practice can be represented through media files, placing these center stage could be a clear solution. For others, the solution might be an active experimentation with, and subversion of, the expectations of the online environment. Practicing artists have expertise in making choices about how and what to present, and this expertise could also guide the exposition design.

Tero Heikkinen is a post-doctoral researcher in University of the Arts Helsinki. He studied interior architecture and furniture design in the Aalto University. He has co-edited two RUUKKU issues and been involved with the technical editing of numerous expositions.