After an artistic practice is exposed as research, it is easy to believe that it has always been research, regardless of its exposition. Conversely, if a case has not been made for something to count as research, a doubt on its epistemic relevance will linger over it. While a different attempt at an exposition may yield different results, we are tempted to see the research in the thing itself and not also in its exposition. This conjecture is problematic.

For JAR, any practice may count as research, which pre-empts (pre )judgements about that practice before its exposition as research. This has very concrete implications. For instance, we receive many messages from artists asking us whether this or that project may be of interest to the journal. We often have to say that we cannot answer the question before we receive its exposition as research. Although we try to discourage it, we sometimes also receive finished papers prepared outside the Research Catalogue accompanied by similar questions. However, even in these cases expositionality is often lacking since the presentation of a project and the ideas associated with it do not necessarily answer questions, such as, how what is presented may count as research or what notions of knowledge are engaged.

Presentations of artistic research often avoid these crucial questions, which is precisely why JAR emphasises the importance of its approach to research through expositions. Furthermore, how expositions of practice as research are made is open, allowing artistic practice and sensibility to matter in a field that is usually associated with academic, standardised writing. Thus, JAR does not necessarily require any direct answers to those questions as long as a submission makes attempts at unfolding its epistemic aspirations in one way or another – ‘directness’ may not always be possible when notions of knowledge are at stake that require the suspension of concepts, for example, or open structures that refuse to settle.

On a more fundamental level, demanding that practice is exposed as research corresponds to a preference for epistemological over ontological approaches to artistic research. Such radical epistemology has two chief advantages. First, it opens the field of relevant practices to the extreme; anything that might make artistic sense can be considered, however minor, marginal, or ‘bad’ it may look, sound, or read. This first point implies a critique of registers of high versus low art that are still used to differentiate contemporary art from the applied arts, so-called outsider art, or from works by non-artistic practitioners. Second, a focus on epistemology gives power to artistic practice to engage with processes of knowledge-making, opening up academic discourse to artistic sensibility both in terms of presentation and – interrelated with this – meaning. This second point implies a critique on a ‘knowledge society’ in which ‘knowledge’ is predominantly instrumental.

However, approaching artistic research by radicalising epistemology makes the job of the artistic researcher a step harder, since, in a world governed by ontology safeguarding disciplines and territories, artistic research may look weaker when compared with other approaches to research that can often more quickly communicate what their objectives and contributions are (and, through this, better argue for funding). The question, however, is whether this added complication really weakens the project.

We at JAR keep debating – often departing from particular submissions at hand – whether there are categorical limits to artistic research when we discuss, for example, where the ‘artistic’ might lie and how it might operate. In other words, we are interested in finding out if artistic research actually requires particular notions of ‘art’. To do so, we continuously challenge ourselves with our own assumptions, which may be the reason why, ultimately, JAR does not represent any particular style of art that could shortcut the kind of labour that is required to make a practice epistemically relevant. The journal, thus continues to embrace the search for expositions of practice as research, and, in doing so, critiques approaches to artistic research that imbue ‘art’ with sets of specific powers that constitute themselves around knowledge’s blind spots. Compared to this, it seems much better to engage proactively with knowledge-making processes on all levels.

While it is true that, following Peter Osborne’s (2013) arguments around notions of contemporaneity, one may associate an emphasis on knowledge-making with the fictional, it is the purpose of the exposition in JAR to assemble evidence that the fictional has epistemic relevance. In fact, it may be that the work that is invested on the side of the episteme is what ultimately grounds contemporary practice allowing for criticality and with it peer-review to enter the scene. This epistemic labour often engages with the material, the transpersonal, and the local dimensions of practice and how those dimensions may be constituted. Without such reflective grounding, even if contemporary art still existed, it would, likely, not matter.

In their contribution to this current issue of JAR, Amber Yared and Heather Davis, in Talking in Circles: Interview, Conversation, Metalogue, suggest how dialogue can be embraced by artistic practice and be instrumental to research. With Art and Research Colliding, Teemu Mäki goes to the other extreme and demonstrates the choices that he sees as possible and a stance that can be taken as art and research ‘collide’. Sheilah Wilson, in The Invisible Inside the Visible, focuses on the role of memory and language as she searches for a race track in Nova Scotia. Juliet MacDonald’s Alpha, a ‘report to an academy’, investigates through drawing and installation practice what kind of meaning the pictures made by a chimpanzee named Alpha in the 1940s have and how nonhuman creativity can inform artistic practice. In Movement Intervention within British Post-War Architecture, Jaimie Henthorn uses dance to interrogate sites associated with brutalist architecture, exploring the interrelationship between meaning and the material world of both architecture and body.

Apart from submissions to the regular issues of JAR on an ongoing basis, we also invite submissions to our first special issue, on ‘Criticism’, guest-edited by Mary Sherman. Having opted for ‘Criticism’ for our first themed issue, we hope to solicit submissions that engage with criticism as practice is exposed as research, employ notions of expositionality in criticism, or suggest a relationship between the two. Please click here for more information. The deadline for the special issue is 30 June 2014.
Osborne, Peter. 2013. Anywhere or Not at All: Philosophy of Contemporary Art (London and New York: Verso) 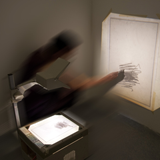 Juliet MacDonald
This is a report of an art-research project that started over four years ago. It concerns drawings made by a chimpanzee as part of a scientific experiment conducted in the 1940s. On the first page I summarise the background to my project, the discussion of drawing that provides a context, and the areas of enquiry that are exposed
[...] keywords:
Animal
Apparatus
Chimpanzee
Collecting
Comparative Psychology
drawing
Experimenting
Tracing
OPEN EXPOSITION

Amber Yared and Heather Davis
Can different forms of dialogue influence the way we learn and think? This was the question that Amber Yared and Heather Davis set out to explore. Drawing upon examples from radical education, we were interested in how dialogic form changes the way we approach a topic and the different kinds of knowledge that it might produce
[...] keywords:
dialogue
education
interview
radical education
OPEN EXPOSITION

The Invisible Inside the Visible